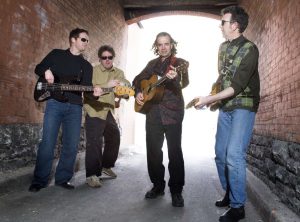 George Sapounidis, Ouzo Power’s front man, is a gently charismatic bouzouki master, who performs with an intensity and passion that comes from the soul, a soul that bears the genetic imprint of a people steeped in non-conformity. He is an intercultural musical pied piper who draws a crowd wherever he goes, a musical ambassador to the world who can perform in a dozen languages, a two-time Olympic torch bearer and subject of award-winning CTV and Chinese television documentaries. He holds a PhD in statistics.

He is also a descendent of Greeks who lived in Asia Minor since antiquity but were forced into exile after the Greco-Turkish War of 1919-1922, relegated to shanty towns, living lives of broken dreams. Like the blues culture of Harlem their despair gave rise to a music of pain and protest. It was called Rebetika, the musicians “Rebetes” or rebels.

In creating Ouzo Power, Sapounidis pulled together a trio of Canada’s top back-up musicians on bass, drums and electric guitar.

Bass guitarist, Stuart Watkins’ talents span the global musical spectrum. He has toured with Paul Anka, David Foster, The Canadian Tenors, has worked with Hip Hop artists in Los Angeles and studied Mblalax music in Senegal (a popular dance music that is a fusion of jazz, soul, Latin and rock, merged with sabar traditional drumming) that emerged in the 1970’s. He played reggae for a decade, not to mention Bhangra (Indian pop), tango, Latin, Jazz as well as folk and rock.

Fred Guignion’s work is everywhere: on countless albums as well as theatre, film and TV sound tracks. He is as comfortable with a folksy ballad as searing heavy metal. He has toured the U.S., Europe, the U.K. and Canada.

“To take a sad, heavy, hard-drinking Greek blues song with bawdy lyrics and turn it into fast rock or reggae, that’s fun. We’re not trying to be witty. We play with the style. We push the envelope.”
— Ross Murray